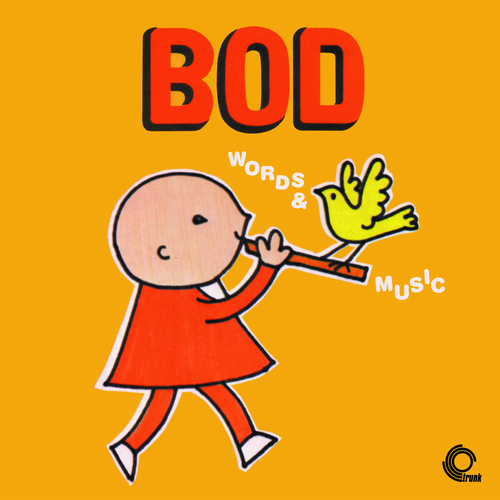 NOTE, THESE ARE NOT LPS, JUST CDS!!! 9 of these Bod CDs were recently discovered in box in the building where the old Trunk Office used to be. It's a classic, some of the CDs have slight case damage, or outer slipcase damage, some are bashed, some have stickers on, hence the price - but you can easily replace the cases. All CDs are fine, unplayed. Get one while you can... and here's the write up:

Here comes Bod. Now I know that's a really obvious thing to say but it's true, especially if you buy one of these limited Picture Discs or CDs. The vinyl looks superb (with the CD art on one side and hundreds of little Bods on the other), and the CD comes with a reverse printed slipcase, which means it feels and looks yummy. Inside, the CD is all bright and colouful, with a long 12 page concertina style booklet, lots of unseen Bod imagery, and very rare drawings of what can only be called "proto Bod". The CD itself runs to 40 minutes, there is all the music, all the themes for all the stars, Aunt Flo, Farmer Barleymow, Frank The Postman, PC Copper, interviews with all the Bod makers, Bod owners, stories, John Le Mesurier and of course a long and most entertaining interview with that God of children's TV, Derek Griffiths. Yes, that's right, Derek Griffiths wrote all the music to Bod. What a suprise. What a guy. This really is a delightful souvenir, gift and anniversary spectacular - Bod is 40 years old this year but it's all explained when you buy it, listen to it and read the wonderful booklet. What a bargain. And you can always buy the picture disc and turn it into a groovy clock.

CD and limited vinyl. And last week I found half a box of Bod Picture discs, so I have ten left when I actually thought I was sold out ages, ago. Super.